See 4 planets during the total eclipse

During a total solar eclipse, the daytime sky darkens, and bright stars and planets pop into view. Charts here, identifying which ones for the August 21, 2017 eclipse. 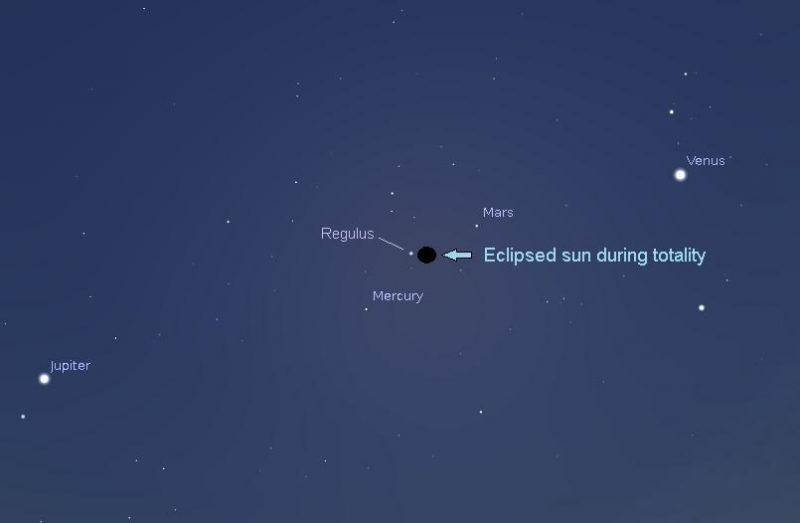 Positions of the 4 visible planets during totality in the August 21, 2017 eclipse. Illustration by Eddie Irizarry using Stellarium.

The total eclipse of the sun of August 21, 2017 will be the most-observed solar eclipse to date. It will be the first total solar eclipse visible from the contiguous United States since 1979. For many people, the eclipse will be a once-in-a-lifetime event, and you’ll want to plan ahead. If you’re within the path of totality on eclipse day, the only time you may look directly at the sun, without using eye protection, are the brief minutes of totality, when the moon will cover the sun completely. In those fleeting minutes, you’ll want to see the dramatic changes going on in the sky and in the landscape all around you. For example, during totality on August 21, 2017 – although it will be close to midday – you’ll easily be able to see 4 planets with the unaided eye near the eclipsed sun!

In order of brightness, these planets will be Venus, Jupiter, Mars and Mercury. Mars is slightly brighter than Mercury, but so nearly the same in brightness that you probably won’t notice a difference.

About 15 to 30 minutes before totality, the planet Venus will gradually become clearly visible near the darkening sun. It’ll be to the west of the sun.

About 30 seconds before and after totality, two other planets will appear. Close to the west side of our star will be Mars, appearing as an orange “star.” At a similar apparent distance, on the east side of the sun, you’ll see planet Mercury. Jupiter – the second-brightest planet in Earth’s sky – will also be very easy to spot, as the bright planet will be located farther to the southeast of the eclipsed sun.

Details on the August 21, 2017 eclipse from eclipse master Fred Espenak 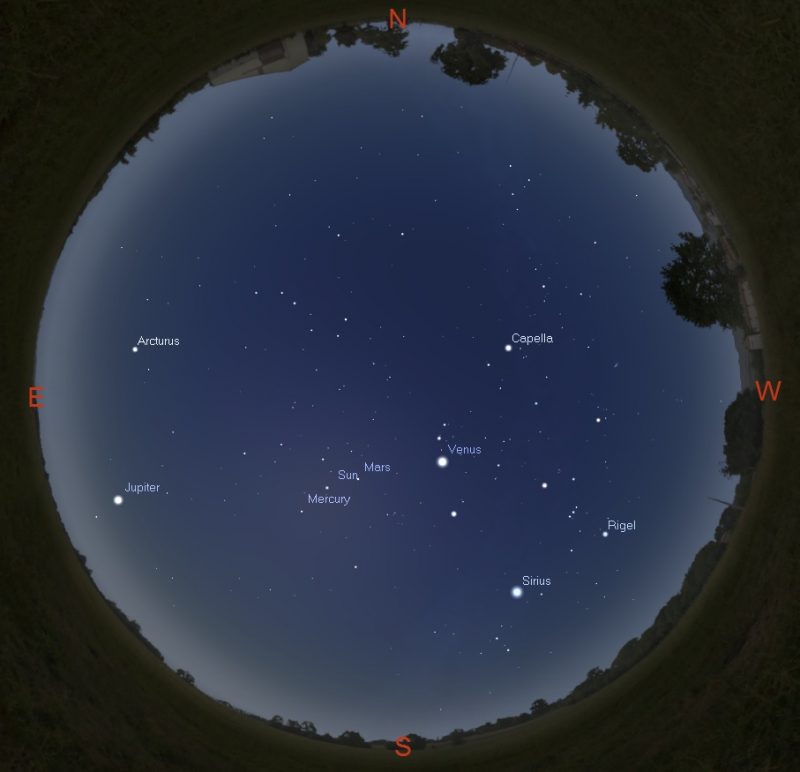 Positions of the 4 visible planets during the total solar eclipse of August 21, 2017, as seen from Wyoming. Plus many bright stars. Notice Orion! Illustration by Eddie Irizarry using Stellarium.

And it’s not just planets. Many bright stars will be visible near the eclipsed sun as well. After all, during a total solar eclipse, the sky turns dark. Just remember that the planets and stars will visible only briefly for those located in the path of the moon’s shadow.

You’ll surely see Sirius – our sky’s brightest star – to the southwest of the sun. It will be very bright, but not as bright as Venus.

Two more bright stars, yellow Arcturus to the east, and Capella to the northwest, will likely pop into view.

You might also be able to see Regulus, the brightest star of Leo’s constellation, very near the eclipsed sun. See the illustration at the top of this post. 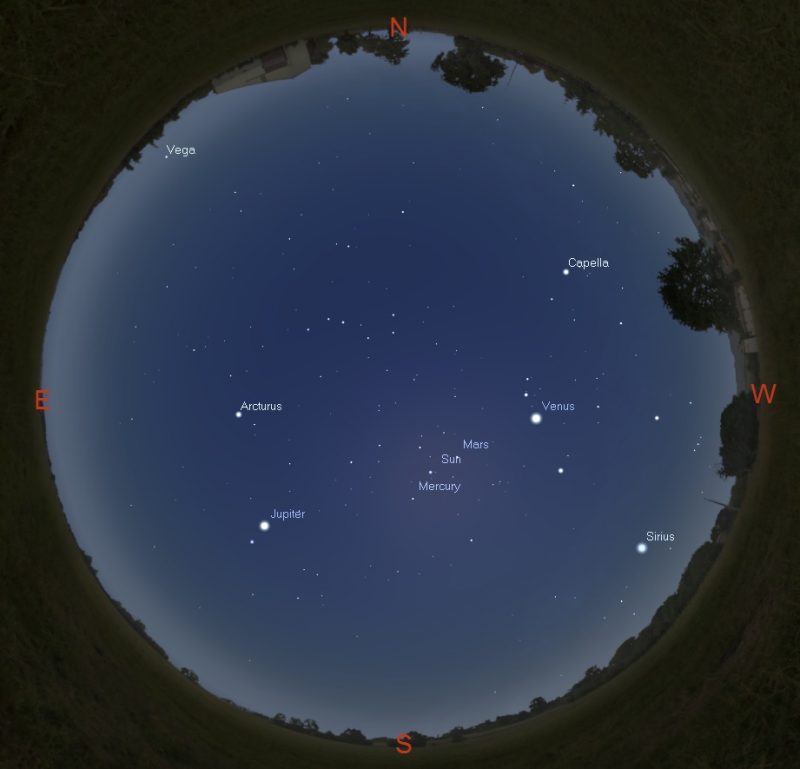 There’s plenty more to see during a solar eclipse, and the precious minutes of totality will happen fast. So educate yourself, and plan ahead.

For example, if you have binoculars or a telescope, it is safe to look (only during totality!) you might be lucky enough to see solar prominences! Check out the photo below. 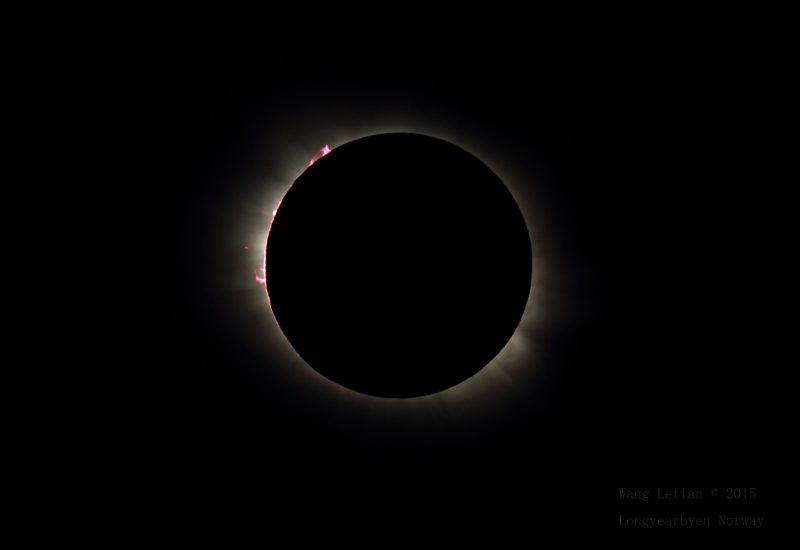 Although it is safe to look directly at the sun during the fleeting minutes of totality – or maximum eclipse – please be sure you are observing with safe solar filters whenever any portion of the sun is visible. Otherwise, you may damage your eyes. Wang Legian in Norway captured this spectacular image of totality during the March, 2015 solar eclipse. Used with permission.

Remember to take just a quick look at the planets, and return your attention to the eclipse itself! Also, if you plan to take pictures, try to use a tripod and make sure you spend more time on seeing the eclipse than photographing it. After the solar eclipse, there will be thousands of pictures of this great event, so it is better to store those amazing images on your brain’s memory instead of your SD card.

Totality will be over very fast, so make sure you live the experience!

Bottom line: The August 21, 2017 total solar eclipse is the first visible from the contiguous United States since 1979. During the eclipse, four planets and many bright stars will be visible in the sky near the eclipsed sun.

Details on the August 21, 2017 eclipse from eclipse master Fred Espenak

Here is a nice interactive map of the 2017 total solar eclipse from www.eclipse2017.org