An astronomer contemplates the equinox

You can think of the equinox not as a whole day, but as a point along Earth’s orbit. Want to understand that better? Guy Ottewell offers some insights. 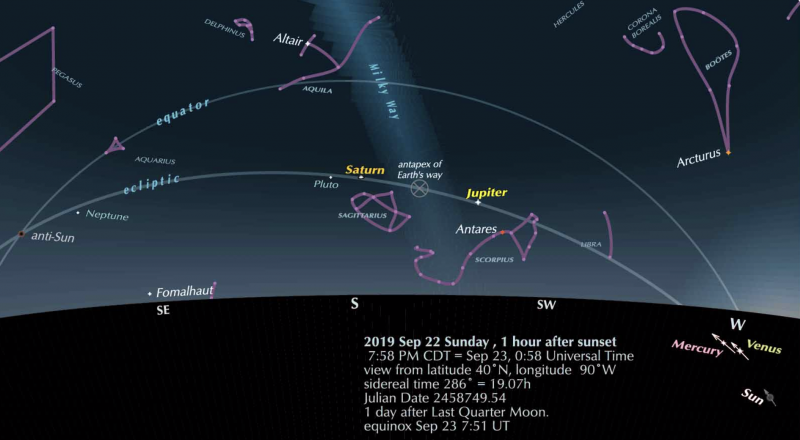 View larger. | This view is about 7 hours before the instant of the September 23 equinox. Image via Guy Ottewell’s blog.

The September equinox falls on Monday, September 23, 2019, at about 8 o’clock by Universal Time. That is after sunrise for Europe, but by American clocks, it’s nearer to the midnight between Sunday and Monday. So the good time to contemplate equinoxes is on Sunday evening.

The sun is arriving at one of the two places where the ecliptic (sun’s path on our sky’s dome) crosses the celestial equator (imaginary line above Earth’s equartor). In other words, the sun is moving into the southern celestial hemisphere. At the opposite crossroads in the sky – 180 degrees away on the sky’s dome – we show an imaginary anti-sun, toward which the shadow of our Earth points.

And halfway between them is the antapex of Earth’s way, the point away from which we are moving in our orbit.

Near this are Jupiter and Saturn, because at this time we are rushing away from them in orbit around the sun. Earth passed between the sun and each of these planets in the summer. Jupiter appeared exactly 90 degrees from the sun (east quadrature) on September 8, and the antapex will reach Saturn on October 7.

View larger. | This 3-dimensional picture shows the planets’ orbits and their paths in the month of September, with sight-lines from Earth to the sun and planets at September 23, 2019. Image via Guy Ottewell’s blog.

The three-dimensional picture shows the heliocentric view for September 2019, with sight-lines from Earth to the sun and planets at September 23. The viewpoint is six astronomical units (AU, or sun-Earth distances) from the sun, at a latitude of 15 degrees north of the ecliptic (Earth-sun) plane and longitude of 45 degrees from the vernal equinox direction (the “zero” point of the sky). We see the sun in that direction at the March equinox; the sun sees us in that direction at the September equinox.

I was out this morning at my cliff-top “dawn point” in good time to see the sunrise. After that inevitable building of suspense, the sun flashed out from the steep face of Golden Cap. It was 7:05 a.m., would have been I think 12 minutes earlier down on the geometrical horizon. I had forgotten to take in my bicycle pannier the means to make a picture, and tomorrow the clear September weather (which has allowed me some swims in the sea) may be over, so for an equinox sunrise picture I’ve had to pull the sun up into a pre-dawn one I made in a past year. 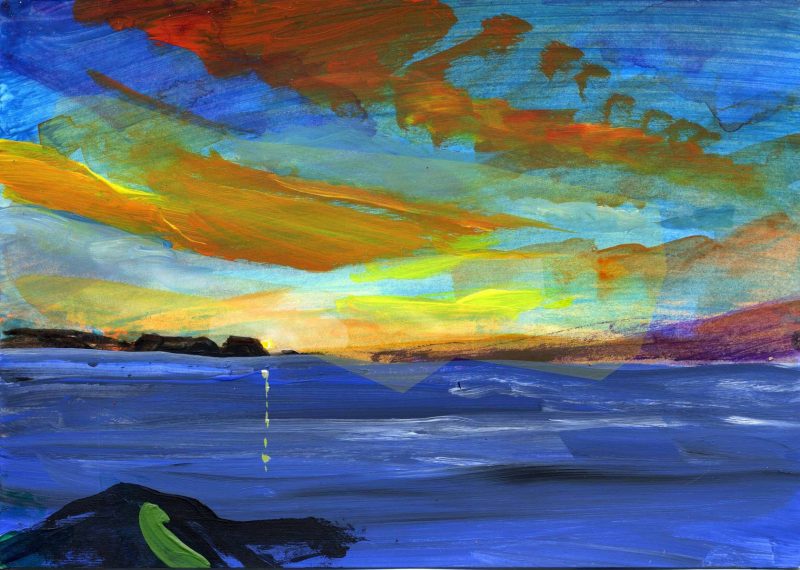 View larger. | Painting of an equinox sunrise by Guy Ottewell, via his blog.