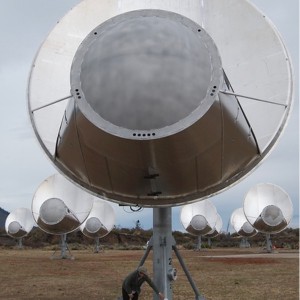 Closeup front view of one antenna of the Allen Telescope Array, a radio telescope for combined radio astronomy and SETI (Search for Extraterrestrial Intelligence) research being built by the University of California at Berkeley, outside San Francisco. The first phase, consisting of 42 6 meter dish antennas like the one shown here, was completed in 2007. Eventually it will have 350 antennas. This type of antenna is called an offset Gregorian design. The incoming radio waves are reflected by the large parabolic dish onto a secondary concave parabolic reflector in front of the dish, and then into a feed horn. A metal shroud can be seen along the bottom of the secondary reflector which shields the antenna from ground noise. It covers the frequency range from 0.5 to 11.2 GHz.

Thank you! Your submission has been received!
Oops! Something went wrong while submitting the form.
END_OF_DOCUMENT_TOKEN_TO_BE_REPLACED