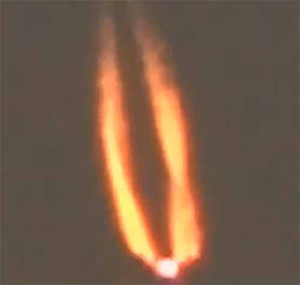 Mike Hankey of American Meteor Society sent this photo, after Mike Taylor submitted a photo he thought was a bright meteor burning up in the atmosphere. Hankey says it was probably a plane and explained why:

I’m not really sure, I would say probably not. Often times planes on the horizon caught in the sun can make images like this because of the sun light going through their contrails.

I would ask a few questions to know for sure:

How long did the object last in the sky? If more than 5 seconds it was probably not the meteor. If >30 seconds then def not.

Was the camera already setup to shoot already, or did Mike see it and then shoot. If the later, then not the meteor because you wouldn’t have enough time to see it and get the camera ready to shoot before it went out.

I would guess there is more than 1 of these photos. If there are similar photos that span more than a few seconds then again probably not.

Also know what direction the camera was facing would tighten things up. The meteor would have been SW from maine.

This is a phenomena with planes on horizon at dusk, makes them look like meteors or fireballs. The way to really know is that they last too long/ are moving too slow.

Thank you! Your submission has been received!
Oops! Something went wrong while submitting the form.
END_OF_DOCUMENT_TOKEN_TO_BE_REPLACED